My second favourite household chore is ironing. My first is hitting my head on the top bunk bed until I faint.

The words glow neon across a bedspread made of Chux wipes, an ode to exhausted women everywhere. On one hand, it’s a comical nod to the tedium of housework. On the other, a biting comment on the expectation that women be satisfied with a life of cleaning, working and sleeping, and the physical and emotional fatigue it brings.

The quilt is a recurring motif in Deborah Eddy’s practice, a tactile embodiment of her social politics seen through the lens of motherhood, grand-motherhood, ageing and equality. Previous versions were woven from building materials and safety equipment – impractical, uncomfortable, and antagonistic. Here, Eddy recasts her shroud as something less abrasive and more cosy, exploiting embroidery’s unthreatening status to convey her message.

In Domesticity, Eddy presents a version of home life that is part Suzy Homemaker, part Stepford Wives. Lace curtains made of bright yellow safety netting frame the windows. Woven buckets and bowls sit alongside woven tea sets, lop-sided and full of holes. Together it suggests a sort of feminist Mad Hatters party has just taken place. Eddy calls these works of craftivism her ‘meaningful mischiefs’ – political and social critiques that help her maintain a sense of humour and modicum of sanity in the face of ridiculous patriarchy. By employing techniques traditionally viewed as feminine and low brow, Eddy is continuing the long history of women using craftwork to negotiate political and social spaces.

For centuries, women have used needlecraft and domestic skills to connect surreptitiously and subvert traditional power structures. In Eddy’s case, invisibility has bred rebellion. As an ageing woman increasingly ignored by society, she dares to push the boundaries of what’s acceptable for ‘mature’ women. Early works incorporated life-size figures in fluro workwear, with sagging breasts and pubic hair made of cable ties. Accompanying video works showed Eddy dressed in high vis protective clothing, dusting a local foundry’s machinery as the all-male workforce continued manufacturing nearby. In another, Eddy dressed in a housewife’s apron – complete with saucepan lids for breasts – as she hung out washing that slowly revealed IF I HAD A DICK I WOULD NOT HAVE TO DO THIS. Given titles such as “Can you see me now?”, the works were a blatant challenge to those who encountered them.

Today Eddy presents a far more poignant view of ageing in her performances, ironing the skin on her stomach and highlighting her facial wrinkles with a surgeon’s pen. In Staying Alive Eddy moves the action to a nursing home where her protagonist, now at the end of a long life of drudgery, is supported by a walking frame and resigned to her fate. There is however a glimpse of the old defiance – resistance may have been futile, but at least she’s going out dancing.

These performance pieces, filmed humbly and without editing or effects, reflect the Absurdist mentality that underpins all Eddy’s work. For every laugh, there is a tragic twist – feelings of frustration that arise out of the contradiction between the quest for a meaningful life, and its inaccessibility to so many people in society. The laugh in Eddy’s work is in understanding the relationship between social status and symbolism – we laugh because we share the same repression.

But so too does Eddy’s art practice show the absurdity of those who would dismiss feminine crafts as lightweight or non-political. The assumed naïveté of women’s work, and by extension the naïveté and quietude of women, is coupled with powerful messages against that same suppression. By embracing the very activities that seek to silence her, Eddy has co-opted her own oppression. 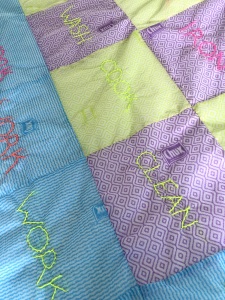 The works in this exhibition are acts of ‘Meaningful Mischief’, humorous
craftivisms which comment on women’s unrelenting, thankless and
invisible labour. Statistically women perform the greater amount of
home duties and Deborah Eddy is railing against it. The artist is drawing
on her own lived and inherited domestic experience by making playful
sculptural objects. Her performance work acknowledges that there is a
high likelihood of winding up in an aged care facility after all the domestic
drudgery is left behind. But there is still mischief to be made.
There are three parts to the exhibition; Non-functional kitchenalia,
Non-functional quilts and a video in which Eddy performs. The sculptural
objects are made from building materials, safety equipment, men’s work
clothes and feminine fabrics such as tablecloths. A hi-vis palette draws
attention to the subject matter while the materiality is clearly not what
these objects would normally be made from. The video work, Staying
Alive, speaks of the spark of life that is still within even at this late stage
in life.